‘Times Square of St. Matthews’ gets an interesting addition

Earlier today, crews installed a clock tower cupola atop the building, which is under construction near the intersection of Shelbyville and Westport Roads, as you can see in the photos.

In case you haven’t noticed, the building is designed to replicate Independence Hall in Philadelphia. And the clock tower was put on just in time for Independence Day. (Yes, they planned that.) The structure weighs 16,225 pounds. It was fabricated by Campbellsville Industries, “the steeple people,” which is based in Campbellsville, Ky. According to a news release, it took more than 1,600 working hours to fabricate. It features a 7-foot diameter clock, created by Owensboro Concept Designs.

Independence Bank is based in Owensboro and is new to the Louisville market. It has built a signature location like this one in 12 Kentucky cities where it has established offices, including Paducah, Frankfort, Mayfield, Madisonville, Murray and in its hometown.

A clock tower cupola was installed by construction crews at the Independence Bank construction site in St. Matthews.

These signature locations have a double meaning, Chris Reid, chairman, president and CEO of Independence Bank, told me in an interview today.

They’re an obvious reference to Independence Hall, where the Declaration of Independence was signed on July 4, 1776. But they’re also a nod to banking independence, he said, as the company champions locally made loan decisions.

“It’s a symbol to our community, to our employers and our shareholders,” he said. “We want to be that independent bank that’s there to serve their community.”

The St. Matthews location is far from complete. I toured the site yesterday and saw how some of the rooms and features in the 8,500-square-foot building were starting to come together. But it’s still very much a construction site.

Louis Straub, president for the Louisville market, told me the office is expected to be finished by Nov. 1. It’s been under construction since November 2017. The project is being led by general contractor Calhoun Construction Services.

Gross Diamond Co. and St. Matthews Hardware previously were at this site. Independence Bank officials dubbed it the ‘Times Square of St. Matthews’ when the project was announced in 2016. The project is about a $10 million investment for the company. For now, Independence Bank is operating from a temporary headquarters at 2120 High Wickham Place, near Old Henry Road. 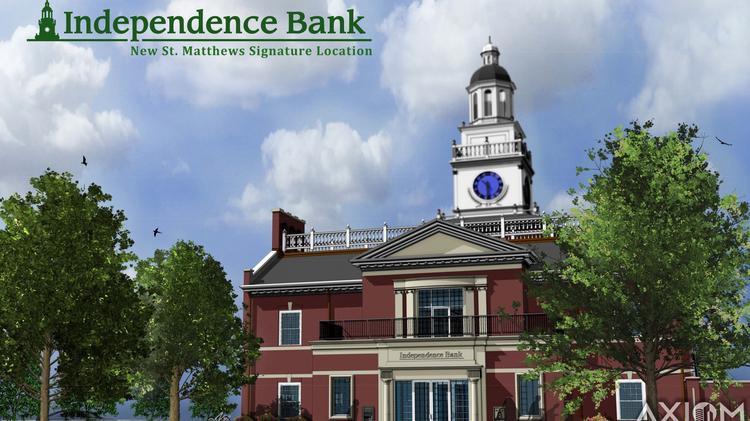